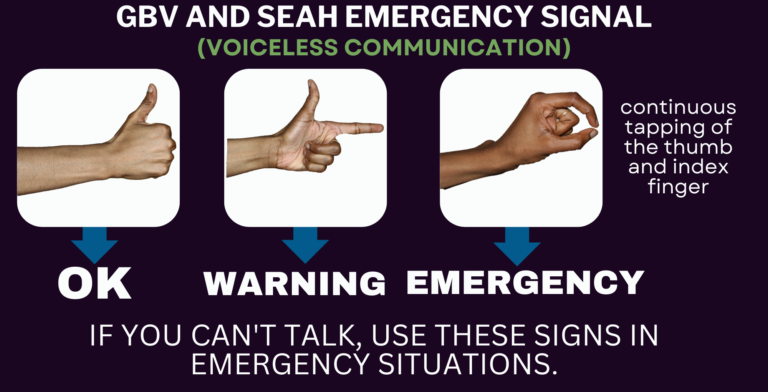 In March 2022, LETSAI, a youth-led, women and girl-child non-profit organisation signed a partnership agreement with UNICEF titled, Increasing Access to Comprehensive and Gender-Responsive Services for Children and Survivors of Gender-Based Violence (GBV) in Dikwa and Shani Local Government Areas of Borno state. (ACCESS-G).

According to the founder, LETSAI, Mariam Oyiza Aliyu, “We are committed to bringing an end to violence against vulnerable persons, especially women and girls through its projects focused on access to comprehensive multi-sectoral and life-saving GBV services aligned to Inter-Agency Standing Committee (IASC) Gender Based Violence (GBV) guidelines and the United Nations Victim Assistance framework.

Through its voiceless reporting mechanism, Aliyu that many times, survivors of gender-based violence especially women and girls have found themselves in situations where they cannot report abuse by talking, especially when the perpetrator is close by.

The innovative Voiceless Reporting Mechanism addresses this with three key sign languages, which makes it easier for victims to report abuse and seek help.

Test-run research on the voiceless messages conducted in Shani and Dikwa Local council revealed that a total of 755 participants reported cases of GBV through the voiceless reporting method. From January 2020 to December 2022, the cases reported include intimate partner violence, rape, sexual harassment, denial of resources and physical abuse.

These voiceless messaging comprise three different signs: First, an okay response shown with the thumb up (This specific sign is used by the survivor to confirm the response).

Secondly, a pointing index finger sign (used by either the reporter or the staff to confirm if the perpetrator is close by to the reporter).

Thirdly, the tapping sign of the index and the thumb signifies danger, and the faster the tapping the more severe the situation of the reporter (This sign is only used by the survivor or reporter).

Slow taps between the index and thumb finger signify a threat but no danger. Cases of Sexual Exploitation, Abuse and Harassment (SEAH) are usually reported for investigation using this method and/or other reporting methods (phone calls or emails).

Continuous tapping signifies an emergency and the survivor will need to be rescued immediately from the scene as their life may be in danger.

“As an organisation, we will continue to partner with the media, relevant Government agencies, National and International partners, other stakeholders and the general public to prevent all forms of GBV,” Aliyu added.

LETSAI, through this project, supported by UNICEF and funded by the Government of Germany and the United Nations Central Emergency Fund will continue to find innovative ways to support vulnerable persons in Borno State.